You don’t have to appreciate weed to readily proclaim that it is one interesting plant. From how the plant grows, smells to the long list of its health benefits, there are several attributes that make cannabis unique.

Most people fully understand that weed gets them “high” or causes a psychoactive experience. And most people also know that THC is responsible for those effects. However, all of this is truly only surface-level information.

Under the microscope, cannabis is far more intriguing than any of us fully understand just yet. Case in point, the entourage effect in cannabis.

What exactly is the entourage effect in cannabis, why does it matter, and how do you experience it? We’ve pulled together the details regarding this scientific idea in simple speak to give you a better understanding.

What is the Entourage Effect?

The Entourage Effect in Cannabis

The entourage effect is the way different active molecules in cannabis work together to produce an effect when consumed together. For example, the entourage effect may have something to do with why strains with the exact same level of THC can deliver two totally different experiences. This is because each strain or phenotype of cannabis has a unique molecular makeup in terms of cannabinoids, terpenes, and flavonoids.

Which Compounds Are Involved In The Entourage Effect?

The three primary compounds thought to be involved in the entourage effect in cannabis are cannabinoids, terpenes, and flavonoids. As noted earlier, cannabis is a highly complex plant with many active molecules that may contribute to the entourage effect. Take a closer look at the primary three and their roles below.

Cannabinoids from cannabis are scientifically known as phytocannabinoids. There are at least 80 unique cannabinoids in the cannabis plant, with THC and CBD being the most prominent and abundant.

There are multiple types of THC, such as delta 8 and delta 10 THC, along with other cannabinoids like cannabichromene (CBC), cannabigerol (CBG), and cannabinol (CBN). These molecules are thought to offer UV protection and help with growth for the cannabis plant.

The terpenes in cannabis are responsible for its intense aroma. These same compounds are present in many other natural products, such as fruit and flowers. Plants that belong to the Cannabaceae family are actually thought to contain as many as 400 identifiable terpenes.

When you catch a whiff of something like Sour Diesel, Blueberry Kush, or Wedding Cake strains, you are actually experiencing unique terpene collaborations. For the plant, terpenes protect against pests, attract pollinators, and may have a number of jobs to do. However, terpenes can also offer therapeutic properties. For example, pinene is thought to have mood-lifting properties and myrcene is a known sedative.

Flavonoids are responsible for the different color pigmentations that occur in plants and flowers. In cannabis, flavonoids will determine the outcome of the color of the bud or the hue of the leaves, for example.

For the plant, flavonoids attract pollinators and may thwart the risks of pests and diseases. But these compounds also have therapeutic properties, and reason for the flavors of with different strains. Terpenes are the other determining factor in terms of flavor. For example, cannaflavin A may have anti-inflammatory properties.

Is the Entourage Effect in Cannabis Scientifically Valid?

The “entourage effect” was first used to describe cannabinoid actions all the way back in 1998. During the study, researchers found that when other endocannabinoids were introduced, the body’s own cannabinoids interacted with CB1 and CB2 receptors differently.

Recently in the last few years, scientists have been able to do further examinations to determine if phytocannabinoids from cannabis show the same initial findings. They do appear to have some synergistic action or work together on some level.

For example, a randomized trial found that a THC isolate did not relieve pain as effectively as a whole plant extract. A whole plant extract contains THC along with CBD (cannabidiol). In studies of CBD for seizures, patients given CBD combined with THC had fewer seizures.

Each type of CBD—isolate, broad-spectrum CBD , and full-spectrum CBD—has distinct advantages. However, only full-spectrum CBD contains all compounds like a cannabis plant, like tetrahydrocannabinol (THC) and cannabidiol (CBD), two of the plant’s many chemical constituents. The entourage effect may make something particularly advantageous.

Other known facts give credence to the entourage effect in cannabis as well. Studies have shown that the ratio of THC to CBD in a cannabis product can affect the psychoactive experience.

In general, higher levels of CBD seem to reduce the intoxicating effects of THC. This may be why smoking a higher-CBD flower results in a less intense high. Strains with high myrcene content are known to be more relaxing, even if THC content is not high.

Ways to Experience the Entourage Effect

To experience the entourage effect, start with a high-quality, properly cured flower to preserve natural plant compounds. Using a high-quality glass pipe to smoke your cannabis strain is also a good way to experience the full spectrum of plant compounds. And get the best of entourage effect from cannabis. The well-designed pipe reduces the chances of evaporating valuable compounds or burning up before they enter your body and delivers a clean smoke with an even temperature.

A glass smoking pipe is one of the best smoking accessories to experience the best entourage effect. Be sure to look at the full collection of glass hand pipes options, including bongs, glass spoon pipe, sherlock pipe, typhoon pipes, and more, available at Chameleon Glass. 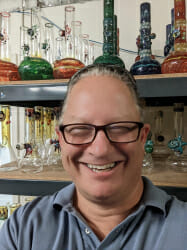 Ken Kulow
Ken grew up in both Ohio and Upstate New York and graduated Clarkson University with an Industrial Engineering and Management BS. He graduated from the US Army Corps of Engineer officer course at Fort Leonard Wood and functioned as a reservist while working for General Electric for 10 years.
He attained an MBA at USC Marshall Graduate Business School and purchased a small glass distribution company. Kind Design distribution became the manufacturing company and brand known as Chameleon Glass and has served the cannabis consumer market for over 30 years.