How a Medical Marijuana Doctor Will Help You Treat Your Migraine?

Headaches- Who doesn’t have them?
It’s like I am also getting a headache right now, thinking about what to write and what not?

Headaches are not something that can be taken lightly. One of the types of headaches which have taken away the lives of many people includes migraines. This takes more than 10% of the total population, which is obviously a lot.

A Brief about Migraines

Migraines are not just simple pains in the head, rather they can be very acute and chronic that cause millions of patients to go through those intense pain episodes periodically.

And imagine, these attacks are not limited to pain, instead, they include brief episodes of vomiting, nausea, tingling sensations, light, and sound sensitivity.

These can leave you completely in exhaustion mode which can cause missing those important meetings, family gatherings, school, and many other important events in life.

So, primarily for relief, people go for over the counter medications, and if the symptoms get worse, they go for prescription medications. But, the end result is usually more pain or side effects that come along with medications such as gut problems, and sensitivity to environmental triggers.

It has been revealed via various researches that migraines or other types of acute headaches are induced in the following regions of the brain- hypothalamus, brainstem, and cortex. So, targeting these areas will help to produce the desired medical effects.

Can Medical Cannabis Be Helpful in Alleviating Migraine Frequency?

With medical cannabis, although, the research is still limited, there are many pre-clinical studies which confirm that medical cannabis can be helpful in alleviating migraine attacks effectively.

Various studies have seen that there is a decrease in the expression of a gene which is related to the CB1 receptors and is also related to the development of migraines.

Along with that, there were also seen an increase in the levels of enzyme which is responsible to degrade anandamide that is responsible for providing relief in various functions associated with the body. Here is where medical cannabis can help by replenishing the body with these cannabinoids.

Another thing which results during the development of migraines is the inhibition of cortical spreading depression which leads to the warning signs before an actual migraine attack. Cannabis helps in the suppression of the activity that leads to the triggers, thereby, reducing pain frequency.

Reducing the Activation of a Primary Sensory Nerve

Nitric oxide (NO) is one of the triggers of pain sensations. In such situations, medical cannabis binds to the CB1 receptors which result in reducing the formation of NO. Hence, no more pain sensations.

Medical cannabis is known to reduce pain by activating the right receptors which modulate the signals that induce pain.

An important piece of fact submitted by the Italian researchers at the Congress of the European Academy of Neurology in 2017 revealed that patients can use medical cannabis as a preventive as well as treatment of migraine pains.

As per their study, more than 45 patients with acute migraine were provided with medical cannabis in varying amounts. It was seen that a dose of 200mg helped in reducing migraine pains by more than 50%.

Another phase of similar research concluded that cannabis was able to reduce more than 40% of migraine attacks with a reduction in the pain intensity by more than 40%.

Another study published in the Pharmacotherapy saw a significant reduction in pain frequency and improvement in the migraine issues.

One other study revealed that medical cannabis is more effective for reducing pain than the available prescription medications with least side effects.

The study included more than 110 patients who suffered chronic migraines along with cluster headaches. It was seen that participants who used medical cannabis as a medication were able to reduce the frequency of pain by more than 53%.

Debbie Anderson — Her days used to start with pressure building in her head and other adjoining areas. This usually led to a lot of pain which was termed a migraine that she was suffering for the past 2 years.

Her routines were more often to the emergency rooms than to her work. She got to a stage when she was poping in medicines just like candy. Everything was turning blue for her.

When ERs started to become reluctant to prescribe medications to her, she started to use medical cannabis as her new method of pain reliever. This made her surer of getting into the medical cannabis program and it entirely changed her life. Today she feels more productive and focused by not having to take time off work due to those dreadful migraine pain attacks.

Here are some of the medical cannabis strains that will be helpful in reducing the intensity of pain and the frequency of migraines. But, talking to a 420 specialist is always recommended for choosing the right strains.

To wrap it up, various preclinical research articles and anecdotal studies have confirmed that there is definitely a role of the endocannabinoid system in migraine progression and induction. Medical cannabis can be effective support or aid for reducing those sudden migraine attacks.

So, choose wisely- opioids or cannabis?
What will be your best friend in times of distress?

Or talk to a 420 doctor for more details concerning cannabis as a migraine pain reliever.

To understand more how our endocannabinoid system works here is a short video with Dr John Teh, Cannabinoid Clinician explaining it in great length: 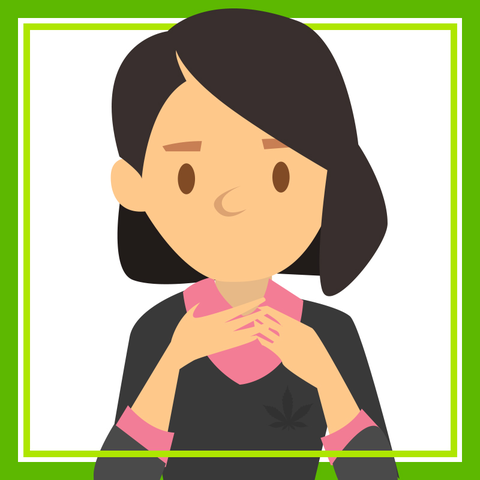 She's a mother to three dogs, and she tries to live life as happily as she can. She's a huge fan of pop music, and she has this habit of listening to albums all in one go. When she's not busy writing, watching movies and attempting to create tasty dishes in the kitchen are what she does with her time. Professionally, she's been in digital advertising and content writing for more than five years.