What is Cannabigerol (CBG)?

Cannabigerol (or CBG) is a non-intoxicating cannabinoid found in cannabis plants. In fact, it appears to act as a kind of master cannabinoid molecule from which other forms of cannabinoids, including THC, are formed. As a result, by the time plants reach maturity, most of the CBG has been converted into other cannabinoids.

That said, the cannabinoid even at about 1% strength in most strains, has already been found to have interesting properties. It is an “antagonist” which means it helps prevent or block certain stimulations – in this case, the CB2 receptor (central nervous system).

For this reason, CBG has a great deal of potential for medical use. This includes pain, inflammation, digestive conditions, skin conditions, glaucoma, cancer and as an antiseptic.

CBG’s Role As A “Minor” Cannabinoid

One of the more interesting aspects of the drug war has been the fight to keep THC out of as many hands as possible. This has been primarily because of its psychoactive effects. However, as more findings show that it is the chemical compounds themselves (either by themselves or working with other cannabinoids) that are accomplishing miracles, these arguments continue to get weaker.

It is also very likely that as medical research begins to get more advanced (not to mention funded) that scientists will be able to create compounds made solely out of this (and other cannabinoids) to better understand what exactly it is that they do.

While pain relief, particularly in serious physical and mental conditions, seems to require THC, there are many other ailments where such treatment is not required. If a “master” precursor to THC can also be tapped for the same qualities, however, what this also means is that it might be possible to create the same benefits without the side effects that many users find disabling if not disconcerting. 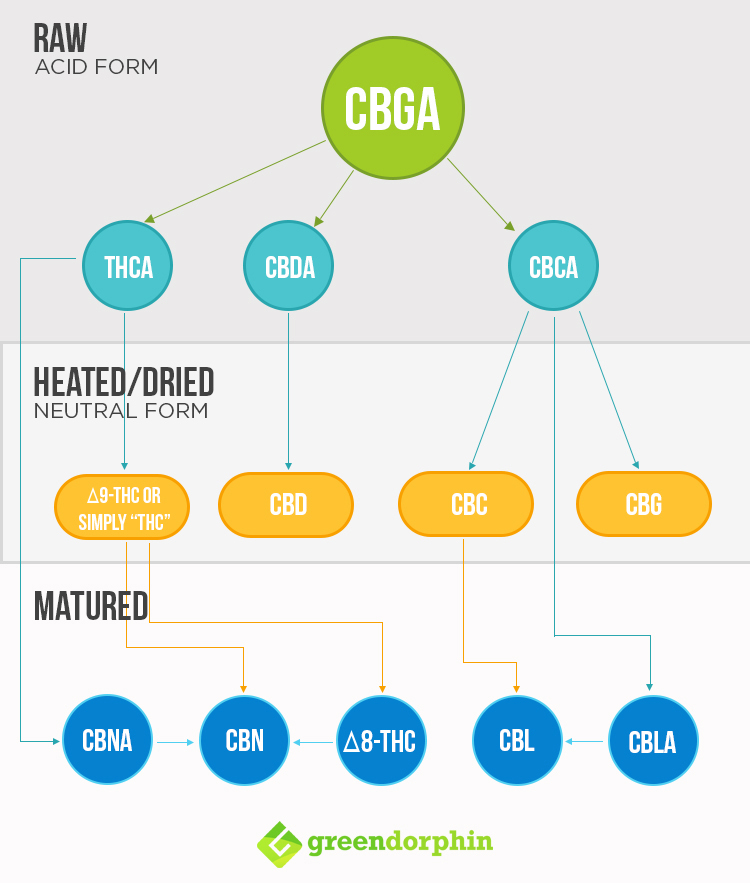 CBG, in other words, may well hold some of the longer terms, systematic answers about the power of cannabis as a drug downstream. If it can be replicated in a lab (for example), and used in this concentrated form, it might also well be that this could be the magic medicine required for all users.

Then again, it may not.

What has emerged in the new century is the following understanding of the human body and cannabinoids. The Endocannabinoid system of the body appears to be a master regulatory system. Its design is intended apparently to maintain homeostasis. This means it helps maintain normal system function. It also appears to understand how to correct systems that are out of balance. That is exactly the “magic” of cannabinoids. Not to mention the science.

The body produces its own endocannabinoids. However, it is also very clear that in people who are sick or even feeling pain, that cannabinoids that are ingested help the system work better. There are cannabinoid receptors in other words, throughout the body, ready to work with a little canna juice, as it were.

This is why cannabis holds such promise for so many diseases.

If you are interested to learn more about the endocannabinoid system, watch the below video with Dr John Teh going into more details:

On top of this, cannabis and in particular CBG shows great promise on another front. Research in Europe has recently found that CBG is an effective antibacterial agent against drug resistant strep viruses (or Staphylococcus aureus). This is one of the largest threats facing particularly hospitals in all western countries right now, particularly in Europe.

Drug resistance, in general, is becoming more of a serious topic. It could be that some kind of cannabinoid, including CBG, might be the next line of defense against the most serious health condition currently facing humankind.

However, if that is true, then it is logical to also assume the following. If a precursor chemical to other cannabinoids was consumed in concentrated qualities, could it act as a health supplement to prevent disease in the first place?

These are all questions that for now, can only be posed. The coming research on cannabinoids over the next decades will begin to provide these kinds of answers.

In the meantime, patients, in particular, will have to take matters into their own hands.

How Can I Get This Cannabinoid?

The best and most straightforward way to figure out what your body responds best to is to experiment. Look for strains that list CBG content. Keep a usage diary.

However, if you become convinced that you want a purer form, you can always look for an extractor. Commercial extractors can isolate specific cannabinoids.

But it will cost you. That is also why there are pharma companies in the mix now. A lot of them are looking at questions exactly like this.

For now? Do your research.

We’d love to hear from you! Share your thoughts in the comments below.