Colorado’s governor John Hickenlooper has decided to use a part of the state’s windfall in marijuana taxes to battle a chronic and in fact increasing problem in the state – homelessness. To that end, the governor is proposing what he terms “aggressive” new efforts to allocate pot taxes for that purpose.

In his budget request for fiscal year 2017-2018, he asked lawmakers for $12.3 million in annual marijuana tax revenues for the purpose of building new housing units for people who experience both chronic and even episodic homelessness. He is also asking for another $6 million per year to aid with housing low-income Colorado residents with behavioural health needs.

One of the Country’s Highest Homelessness Rate

This is the first attempt by the administration to designate pot taxes for this purpose and comes at a time when federal figures show Colorado’s homelessness rate is one of the highest in the country. In 2016, the state saw a 6% increase in homelessness, which places it 7th in the nation. The state has less than 7,000 year round beds for the homeless on an annual basis.

That said, it is not the first time Hickenlooper has specifically targeted this population for help. As the owner of a brew pub in the late 1980’s, Hickenlooper routinely hired homeless workers. He also cites the issue as one of the most important political themes of his entire career – beginning with his first stint as Denver’s mayor in 2003. 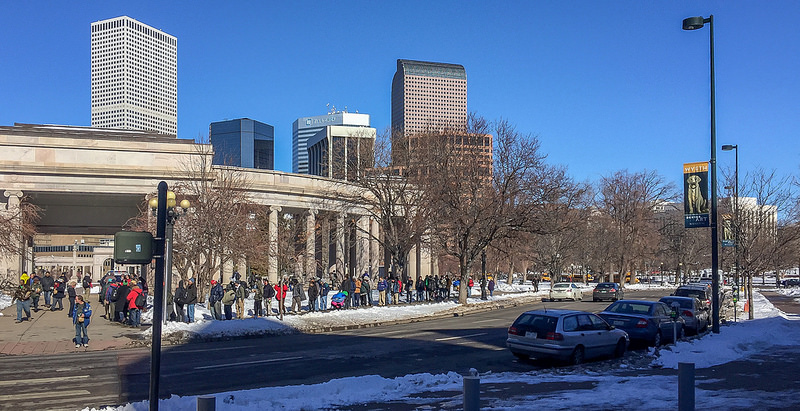 As Hickenlooper is quoted as saying, “My argument — and it’s the same argument — is we spend more than twice as much … perpetuating lives of misery by letting people live under bridges than we would getting them into housing and giving them wrap-around services — by which I mean, job training at the top of the list, counselling for addictions and medications for mental health.”

The move comes at a time when officials are also linking homelessness rates to the marijuana market itself.

Current state law allocates the use of taxes from legal marijuana businesses for law enforcement, schools, health care and substance abuse prevention and treatment. Diverting a portion of these funds, therefore, would take a change in the law, which in turn may generate opposition in the legislature.

That said, such opposition at this point is also pure conjecture, and comes at a time when cities if not the state of Colorado are seeing the opportunity of the pot tax windfall, to specifically earmark funds for this purpose. In fact, earlier this year, Aurora, one of the largest cities in the state, announced that it will donate millions of dollars from local pot taxes to combating the homelessness problem in the city.

The move also comes as other cities across the country are proposing similar programs. In March, Los Angeles proposed funding housing for homeless people through a direct, allocated tax on pot sales estimated to bring in around $16.7 million. Seattle is also considering similar initiatives.

Is It A Sustainable Solution?

However, no matter how popular such ideas are – across the country – the greater questions about all of this are that pot taxes are increasingly seen as a way to collect revenues against a political climate where tax decreases are all the rage. That starts at the federal level. It is widely expected that Donald Trump will follow through on his plans to sharply reduce taxes, particularly for businesses and wealthier individuals. The truth of the matter is, no matter how popular pot taxes are for curing various social problems, the market is simply just not big enough – certainly not yet – to be relied on as a panacea for overall shrinking public funding for a multitude of problems that have only gotten worse since the Great Recession.

READ RELATED STORY
Cannabis in Spain: Why the World Should Follow in their Footsteps

Further, at some point, the marijuana industry is also likely to start revolting against the relatively high taxes that are levied on it – and which in turn, unlike every other legal industry in the country, are not deductible from overall income. This is because of the Schedule I status of the drug on the federal level – which overall increases direct costs to businesses in the sector. As the trend continues to back out “social needs” funds from such revenues, it is also increasingly likely that the industry will begin to claim that it is being unfairly targeted, particularly given high and growing acceptance of legalization across the country.

The approach for using so-called “sin taxes” for the greater good is not a particularly novel idea. It has been used to allocate taxes for social needs from cigarettes, alcohol, candy, soft drinks, coffee, sugar and gambling throughout the history of the United States. However, they have never been used exclusively to fund extensive social needs, which are particularly pressing now given overall economic trends and realities in the US in particular.

Therefore, while Hickenlooper’s efforts, as well as others around the country, to target the revenues from the industry for social causes is commendable, it is a small drop in the bucket against a larger overall debate about the role of the state in the lives of people too young, poor or sick to move with broader economic trends if not the job market.

Will this move by Colorado to use taxes collected from Marijuana businesses to solve homelessness influence other states?

Let us know your thoughts in the comments below.